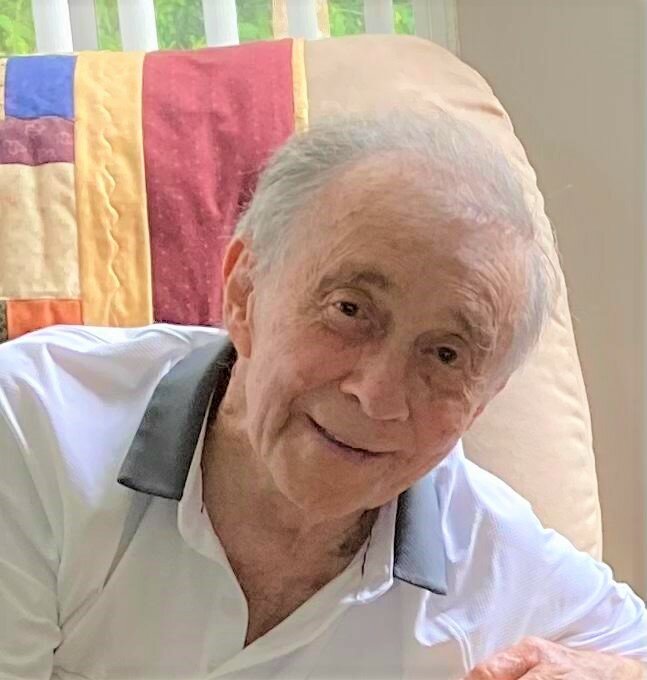 Howard Earl Joseph, born April 13, 1927 in Pittsburgh PA, died peacefully of natural causes at Oak Hill Senior Living Center January 9, 2022. Howard is survived by his wife of seventy-three years, Elizabeth (Cunningham) Joseph and daughters Carol Anderson, Linda Wohleber (Robert), and Nancy Berens (John). He was a loving grandfather, known as Bebop, to his eight grandchildren, Taylor Yoes, Tiffany Hymel, Robin Authement ,Tracy Mitchell, Kate Miles, Joseph Wohleber, Ken Smoot and Charles Wohleber. He was also a great-grandfather of seventeen. He is predeceased by a sister Ruth Moroz. Howard grew up in Hazelwood in the shadow of the Pittsburgh steel mills. His family was a close-knit one and they often shared duplexes with aunts, uncles and cousins. He remained close with his cousins throughout his life. When Howard was seventeen, during WWII, he left high school to enlist in the United States Navy. He began his Naval training at Sampson Naval Training Base on Seneca Lake, NY in April of 1944. He wrote letters home to his mother, father and sister nearly every day and his mother kept all of his letters. At the conclusion of his basic training he traveled across the country by rail to California to await his duty assignment. He joined the crew of the USS Bull, a destroyer escort, and served as an Electrician's Mate. He traveled throughout the Pacific and had many adventures with his fellow shipmates and later in life, would reunite with many of those friends at the USS Bull reunions. After his service he returned to Pittsburgh and finished high school while working various jobs at the steel mills and railroads. He met the love of his life, Betty, and they were married in August of 1949 and started their family. While he and Betty were raising their three daughters, he was working full time at Pennsylvania Transformer and attending night school at Duquesne University of Pittsburgh. In 1960 the family moved to Upper St Clair, PA where he advanced his career at McGraw Edison and in 1964 he received his B. S in Business Administration. In 1974 they moved to Cincinnati where Howard worked for the Weir Kilby Division of L. B. Foster. He was the plant manager overseeing the production of railroad equipment. Howard and Betty then retired to Florida in 1991. They continued to be very active there golfing, playing tennis, dining and dancing at the Elks Club and attending Grace Presbyterian Church. Howard played shortstop for multiple company teams and continued to love the game, playing in senior senior leagues until his mid-80’s. Howard made great friends and some great plays on those teams. He loved working with his hands and was always disassembling and reassembling various gadgets. He was smart, witty and tech-savvy and was able to navigate his iPad and even Facetime with his friends, grandchildren and great-grandchildren until his final weeks. He will be dearly missed by all of those who knew him and loved him. Friends and family will be received at Pinecrest Funeral Chapel, 3369 Mariner Blvd, Spring Hill Florida. Visitation will be 2:00-4:00 PM and 6:00-8:00 PM Thursday, January 20th. There will be a memorial service at 10:30 AM Friday, January 21st at Pinecrest Funeral Chapel. Afterwards a procession will travel to the Florida National Cemetery in Bushnell, Florida and at 12:30 PM he will receive full military funeral honors. Please wear masks. Thank you.
To order memorial trees or send flowers to the family in memory of Howard Earle Joseph Jr, please visit our flower store.