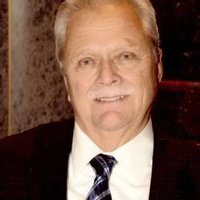 PARKER, EDWARD JR., 78, resident of Florida, passed January 25, 2016. He enjoyed golf, working out with weights, movies, traveling, especially to Hawaii and Nova Scotia. He had served three years as an officer in the United States Air Force. He started his own heating and air conditioning company that grew to serve nine states. He was a private and humble man who never stopped learning. He is survived by his wife, Agustina M. Parker, his children, Cathy Parker Gulley, Mike Parker, and Matt Parker, nine grandchildren, Mandy, Megan, Misty, Kaly Kristy and Kameron Parker; Jonathan and Jason Steele and Jennifer Steele Hutchins, six great grandchildren, McKayla Johnson, Mason, Matthew and Kate Steele, Kaylee and Dylan Hutchins, stepchildren, Natalie and James. A memorial service will be conducted February 8, 9:00AM at Pinecrest Funeral Chapel. Inurnment to follow at Florida National Cemetery, Bushnell.
To order memorial trees or send flowers to the family in memory of Edward Bell Parker, please visit our flower store.