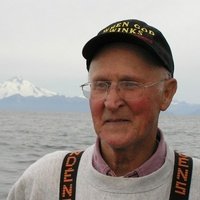 Ervin "Lee" Lowe Jr. passed away at his home in Brooksville, FL after months of illness. He was 84 years of age. Lee was born to Ervin, Sr. and Minnie Lowe on October 12, 1934 in Livingston, KY. His family moved to Richmond, IN when he was 7 and lived there until he was 17. He then enlisted into the Marines. He served his country from 1953 to 1962; achieving the rank of Staff Sergeant while working in the supply division, and getting many opportunities to see the world. After leaving the Marines, Lee settled in Palm Springs, CA where he met his wife Alma (Tilton) Lowe. They married in 1963. In 1967, after several moves and several children later, they made their home on Martha's Vineyard island in MA, where Alma had grown up. Lee was a jack of all trades and was skilled at home building, building several homes from the ground up. He was hired on to do maintenance at the Colonial Inn, Pequot House, Lamp Post, Hot Tin Roof and Wesley Hotel. He enjoyed deer hunting and fishing, taking his family on Sunday drives around the island. He even built a pine derby track for his son's boy scout troop which he helped out with. After retiring, he and Alma moved to Brooksville, FL in 2002 where he became involved with the Marine Corp League #708. He proudly served with the Honor Guard which provided services at Florida National Cemetery in Bushnell for ten years. He felt privileged to give back to those who also served. Lee is survived by his wife of 56 years, Alma: their sons, Christopher (Gwen) of Long Beach, Ca; Thomas (Roberta) of Arvonia, VA; Damion (Theresa) Childs of Vineyard Haven, MA; Donald Childs of Vineyard Haven, MA. Their daughters, Brenda (John) Pazar of Brooksville, FL; Amy (Gary) Wajda-Nelson of Lower Waterford, VT. Lee loved his 9 grandchildren and 4 great-grandchildren. His service will be held at Florida National Cemetery in Bushnell on March 21, at 11 am. There will be a reception following at the VFW #10209 in Spring Hill, FL. The family requests in lieu of flowers, please send any donations to the Gary Sinise Foundation in Lee's name.
To order memorial trees or send flowers to the family in memory of Erwin Lee Lowe, please visit our flower store.