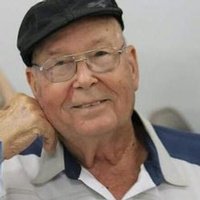 Gerald (Jerry) Davis Fox, 84, of Brooksville FL went to be with His Lord on Wednesday, February 11 at the HpH Hospice Care Center. Born at home in West Frankfort, IL on February 1, 1932, he was the only son of Gerald B. Fox and Fairy Josephine (Davis) Fox. He spent the majority of his life in the Kankakee, IL area, where he owned and operated two businesses Jerry Fox Inc. (Bourbonnais, IL) and Fox RV Center (Manteno, IL). He was also a realtor in the area, as well as in Brooksville, FL. He loved “hot” cars, woodworking in his shop and his family! Jerry was a founding member of Bethel Baptist Church in Bourbonnais, IL before relocating to Florida, where he is now a member of First Baptist Church of Brooksville, but more importantly he loved the Lord. On November 3, 1952 Jerry married Alice Tate who has preceded him in death. They have two surviving daughters, Debbie Fox and Jeri Janek; son-in-law John Janek; 12 Grandchildren, Tim Pressler, Bryan Pressler, Joshua Pressler, Kristen Brown, Kati Hazlett, Misty Chouinard, Tara Rish, Brennen Chouinard, Jamie Case, Michelle Vana, Mike Janek, and Heather Janek. 18 Great Grandchildren and his only surviving Uncle, Bill Fox.
To order memorial trees or send flowers to the family in memory of Gerald Fox, please visit our flower store.