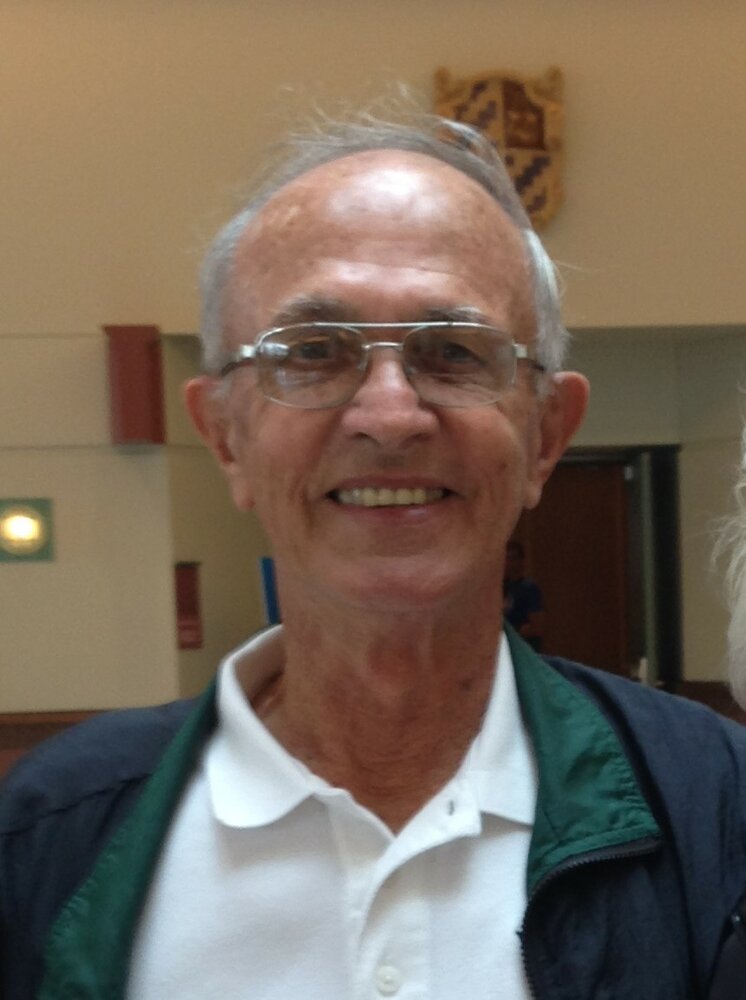 John Polo Jr, loving husband, father, grandfather and friend, passed away on August 13, 2021 in Spring Hill, Florida. John was born to the late Margaret (Saggese) and John Polo Sr on September 2, 1936 in Oneonta, New York. He was preceded in death by his beloved wife, Virginia (Lull) and sisters Ann Kent, Teresa Carciobolo, and Angie Hubbard. John was a graduate from Oneonta Central School, University of Oregon, and received his Masters Degree from the University of Montana. After high school, John enrolled in the Air Force, where he was stationed at RAF Chicksands in England. It was there that he began his athletic career while working as a Radio Intercept Operator. John was married to “Ginny” on December 23,1961. They traveled across the country for work and school before settling in Big Flats, NY to raise their five children. Upon retiring in 1995, John and Ginny moved to Spring Hill, Florida. At the University of Oregon, John played Defensive End for his beloved Ducks, where he and his team competed in the first Liberty Bowl in 1960. After college, John and Ginny moved back to NY, where he began his coaching career as Assistant Football Coach for the Ithaca College Bombers. John was then on the faculty at Corning Community College as Athletic Director, Physical Education Professor, and coach for 28 years. More than a teacher, John was a role model and mentor to the countless students and athletes he came in contact with. He was awarded the CCC Board of Trustees Excellence in Teaching Award, was inducted into the NJCAA Region III Wrestling Hall of Fame, the CCC Athletic Hall of Fame, the Corning-Painted Post Sports Hall of Fame, and was twice named the Region III Coach of the Year. John was also very active in the community where he served on many race committees, founded the Red Baron Half Marathon and was a wrestling official for 33 years. The John Polo 5k Run/Walk is still run annually in Corning. John also proudly won the 70-mile General Clinton Canoe Regatta, and placed in the top 5 more than once. In their retirement years, John and Ginny traveled the world and shared many adventures with family and friends. Bike trips, canoeing, golf, bridge, and daily “Toddy Time” with friends were just some of their favorite pastimes. John is survived by his three sons; John (Jeannette) of Danville, CA, Jeffrey, of Victor, NY, Jay (Ellen), of Warwick, RI and two daughters; Jennifer and Johanna of Rochester, NY. He was the adored Papa to his eight grandchildren; Jordan, Emma, Jaclyn, Jake, Olivia, Dory, Abigail and Caroline. A Mass of Christian Burial will be celebrated at St. Frances Cabrini Catholic Church, on August 24, 2021, 10:00 AM. In lieu of flowers, the family suggests donations may be made in John's name to the American Heart Association at: www.heart.org Please just copy and paste link and put it in the address bar to go directly to The American Heart Association. Thank you and God bless.
To order memorial trees or send flowers to the family in memory of John Francis Polo Jr., please visit our flower store.