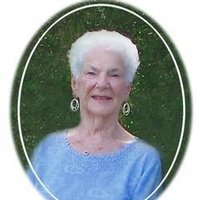 Joyce Miller, 93, Mott, ND, died January 26, 2017, at the Good Samaritan Nursing Home. A memorial service will be held at the Pinecrest Funeral Chapel in Spring Hill, Florida on Tuesday, February 7th at 10 am and burial will be at the National Veteran’s Cemetery in Bushnell, Florida. Joyce was born June 29, 1923 in Sioux City, IA to Helen (Lawler) and John Busko. She was raised and educated in Breckenridge, MN until age 15. After the death of her parents, she lived with her aunt, Margaret Lawler, in Chicago where she graduated from Immaculata Girls Catholic School. Joyce met William (Bill) H. Miller at a school dance in 1942 and they married March 8, 1945. They started married life living in Chicago with her Aunt Margaret until Bill completed building their home in Glenview, Illinois. They raised their four children in Glenview and later retired to Brooksville, Florida in 1985. Joyce and Bill loved the outdoors and being active. Every weekend they would be at the lake camping, water skiing, and enjoying their family and friends. They loved to travel and had the pleasure of visiting all 50 states as well as a New England fall tour, Caribbean cruise, and many annual trips to visit all of their children and grandchildren. They were married 64 wonderful years. Joyce entered Good Samaritan Home in Mott, ND June 2013. She resided there under their loving care until her passing. Joyce is survived by her 4 children; William (Sandra) Miller, Elgin, ND; Dennis (Gail) Miller, Glenview, Illinois; Cathryn (Neil) Drakeley, Libertyville, Illinois; and John Miller, Summerfield, Florida; 7 grandchildren and 8 great grandchildren; her brother, John Busko, and sister-in-law, Shirley Miller. She was preceded in death by her husband, Bill; her daughter-in-law, Ellen Miller; and her parents.
To order memorial trees or send flowers to the family in memory of Joyce Miller, please visit our flower store.