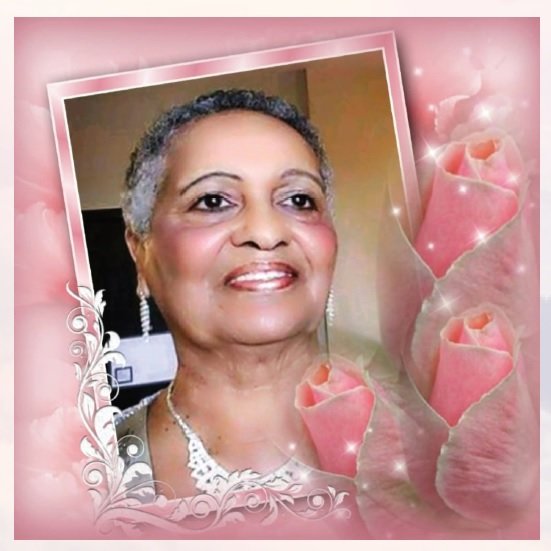 But let your adorning be the hidden person of the heart with the imperishable beauty of a gentle and quiet spirit, which in God's sight is very precious. 1 Peter 3:4

A true reflection of this verse, Marlene (Enos) Riley lived her life with admirable love, grace, and beauty. Throughout her 81 years, her inner and outer beauty captured the attention of family, friends and strangers, leaving many in awe of how gracefully Marlene aged.

Born on the beautiful island of Bermuda on December 1, 1937 to the late Goodwin Ross and Emily Elizabeth Enos, Marlene was the eldest of her three siblings, Caroline Burgess, Frank and Owen Enos. Her warm and loving personality allowed her to build special and lasting relationships with each of them.

A deeply devoted mother to her children, Karen and Kathy, Marlene worked hard as a single mom and provided well for her daughters. “We never wanted for a thing,” said Kathy. “Sure didn’t,” Karen agreed. “We had unconditional love, and I can’t remember a day she wasn’t there for us.” Marlene was later blessed with and extremely proud of her two grandchildren, Ayinde and Danya, and four great-grandchildren, Teri, Micah, Ayv’a and Addisyn.

On March 18, 2002, Marlene and George Riley were united in marriage and enjoyed an active life together, traveling often and extensively. Some of their adventures and long road trips took them to audience seats at shows such as The Dr. Oz Show, The View, and Dr. Phil. Members of Rivers of Life Church in Brandon, Florida, they also enjoyed new worship experiences by visiting well-known churches during their travels.

Marlene’s children will never forget the example she set by her strong work ethic. Karen clearly recalls the day she was looking out the kitchen window in their New York home, watching her mom walk through knee-high snow to go to work. “I can still see her hat, scarf, boots and gloves,” said Karen. “I remember the time she sprained her ankle and hobbled down the snow-covered steps with a cane to go to work,” Kathy recalls. Marlene was insistent that her children not miss work. “But I wanted to take the opportunity to utilize my PTO, the personal time off I had acquired, but she still had a problem when I used it,” Kathy said with a laugh.

While Marlene’s first jobs included babysitting and working at a printing press in Bermuda, she was most proud of her lifelong career in banking, which spanned from Bermuda to New York to Florida, where she retired.

A meticulous record-keeper, Kathy will never forget her mother’s financial advice to “balance your checkbook to the penny!” Marlene was equally as meticulous with her handwriting, housekeeping and maintaining family records. Her family jokes that if you should ever forget your age or the number of years you’ve been married, you’re sure to find those details from the beautifully handwritten notes in Marlene’s calendars and journals.

If anyone had news to share, Marlene certainly had an ear. For instance, when visiting her Aunt Marlene’s home each Sunday morning before heading off to Sunday School, Marlene’s niece, Penny, who was about five years old at the time, would prop herself up on a white kitchen stool and fill her aunt in on all of the family news that had transpired that week. Marlene listened intently, as if she was tuned in to the local television news.

A glamorous fashionista, Marlene cared a great deal about her appearance. However, she had an extreme aversion to exercising, often intentionally leaving her school PE clothes at home when she was a child. One day, Marlene’s gym teacher had enough of her excuses and made her walk all the way home and then back to school again - with her gym clothes.

During Marlene’s late teens, there was a law in Bermuda prohibiting females from wearing short-shorts in public. If caught doing so, the police would issue a green ticket. Caroline remembers the day Marlene got one of those tickets and how terrified she was to tell her parents, but she need not have worried because the policeman got to her parents before she did. About those shorts, the irony of the story is that later in Marlene’s life, she detested wearing shorts because she thought her legs were too skinny.

A lover of music, Marlene learned to play the piano during her childhood and enjoyed singing in her beautiful alto voice. Caroline has fond memories of them singing duets together at church functions. Together, they also modeled each week on television for a clothing store in Bermuda.

A faith-filled woman with an always-positive spirit, Marlene routinely began each day at her kitchen counter, sipping a cup of coffee, reading her morning devotionals and filling them with inscriptions.

When Marlene’s active lifestyle slowed down due to health challenges she encountered during the last stage of her life, her devoted goddaughter, Debbie Glasgow, traveled from Bermuda to Florida to assist with her care. Marlene often expressed her gratitude to Debbie for being there along with George, Karen and Kathy. In the presence of her loving family, Marlene took her last breath at 9:23 p.m. on May 14 in her Spring Hill, Florida home.

A few days later, Caroline spotted one of Marlene’s journals that contained only one entry written by Marlene, which read, “It is well with my soul.”

To order memorial trees or send flowers to the family in memory of Marlene O. Riley, please visit our flower store.