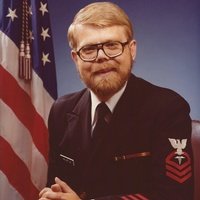 Paul Ward Settle, born October 5, 1942, in Louisville, KY to the late Hedwig Fickert Settle and Maurice Ward Settle of Louisville passed away December 15, 2018. I He is survived by his wife Leta Settle, daughters, Michelle Hughes (Wes) of Clearwater, FL, Julie Tweed (Brian) of Ireland and 3 grandchildren; sister, Diane Maria Settle Duffy (Mike) and nephew, Brandon Ward Duffy of Louisville, KY. Paul retired from the United Stated Navy. He served in many duty stations over his career. After retirement he was a corrections officer for VanBuren County Jail, Paw Paw, Michigan and settled in Florida in 2004. Paul volunteered as a First Responder to the Quick Response Team Paw Paw, MI, and had many volunteer hours at local hospitals in Spring Hill, FL, also volunteer at Homosassa State Park and was involved with a Medical mission trip to Guatemala. The family suggests that memorial donations may be made to Heifer International, 1 World Avenue, Little Rock, AR 2202, phone (855) 948-6437.
To order memorial trees or send flowers to the family in memory of PAUL WARD SETTLE, please visit our flower store.