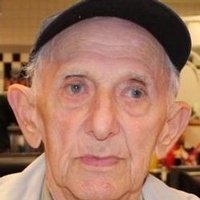 Langill, Russell James, 82, of Spring Hill, passed under Hospice care in his home surrounded by family on February 26, 2017. He was an Army veteran and was a long time employee for Interstate Trucking Systems in Avenal, New Jersey. He had a passion for Yankees baseball. He is survived by his 6 children, Janet Brunetti, Spring Hill, Kathy (Jerry) Marowski, Acworth, GA Dianne (John) Nigro Spring Hill, and Bernadette Perillo, Spring Hill; Russell (Nancy) Langill, Hazlet, New Jersey and Larry (Jannine) Langill, Acworth; 19 grandchildren and 19 great-grandchildren. He also leaves behind his beloved dog Reggie. He was preceded in death by his wife, Carolyn in 2005. Friends may call on Friday, March 3 from 10-12 at Pinecrest Funeral Chapel. A Mass of Christian Burial will be celebrated at St. Frances at 12:30 followed by military honors with United States Army Reserves and Marine Corps League #708 at Florida National Cemetery in Bushnell, Florida.
To order memorial trees or send flowers to the family in memory of Russell James Langill, please visit our flower store.