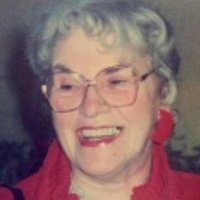 McDonough, Sally B. a.k.a. Sarah Bernice McDonough, age 86 of Brooksville Fl passed away on Wednesday, March 23rd, 2016. Born in New York City to Edward and Evelyn Clarke in 1929, Sally was first married to Robert Michael Westbay Jr. whom she had met while they both worked at a Wall Street brokerage firm. Sally had 5 boys with “Bob” before he tragically died at age 48. Sally then worked as a teller and then manager of a savings bank while raising her 5 children. She then married James McGrath and adopted his son but was widowed again shortly after. Her family again grew even larger after marrying Bernard McDonough who had 6 boys and 1 girl. Sally and “Barney” loved ballroom dancing and were proud, loving parents of all 13 children. They eventually moved to Florida to enjoy retirement, dancing, a vintage car club, the Elks Club, and volunteer work for both the Hernando Heritage Museum and the Humane Society animal rescue as well as participating in the Brookridge community shows. They both lived and loved life always together until Barney passed away in 2004. Sally was a great singer, dancer and comedian who would always say, “to rest is to rust.” A wonderful mother of 13, grandmother of 16, and great grandmother of 2, Sally Clarke Westbay McGrath McDonough will be dearly missed, fondly remembered and always treasured. A memorial service celebrating her life will be held on Tuesday, March 29th at Pinecrest Funeral Chapel, 3369 Mariner Blvd. Spring Hill, Fl 34609 from 3:00 to 7:00 pm followed by a 10:00am mass Wednesday, March 30th at St. Joan of Arc Catholic Church, 13485 Spring Hill Dr.
To order memorial trees or send flowers to the family in memory of Sally B. McDonough, please visit our flower store.